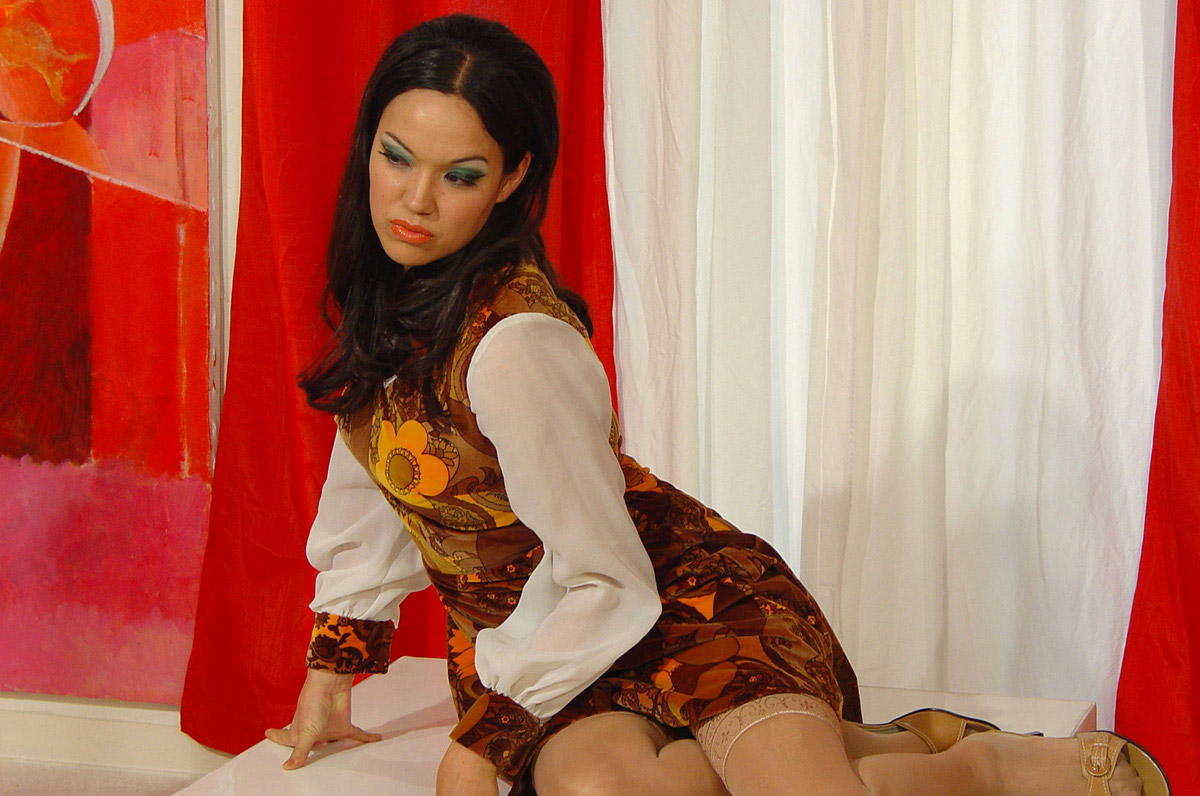 In the interest of pure cinema or “proper art” (which James Joyce defines as art which elicits a state of aesthetic arrest), I try to control everything that goes into the film frame. Thus in my work I am trying to do something most unusual: to create “proper” art films masquerading as popular films. So while I am quoting genres, I am using them not as pastiche, but to create a sense of aesthetic arrest and to insert a female point of view.

ANNA BILLER is a writer and director who creates unique, female-focused, highly visual films. She has a BA from UCLA in art and an MFA from CalArts in art and film. Her first feature Viva played in film festivals all over the world and gained minor cult status, and her second feature The Love Witch won acclaim for its elaborate visual style and feminist themes, and has screened at numerous film festivals worldwide.

The New York Times called The Love Witch “a hothouse filled with deadly and seductive blooms;” The New Yorker called it “a metaphysical astonishment;” Film Comment said, “Biller’s sharp film stands in stark contrast to the complacency and crushing safeness of the vast majority of independent films made in the US. Shot in 35mm, her film displays a technical mastery that is glorious to behold;” and The Austin Chronicle said, “Anna Biller has quickly established herself as one of the most exciting filmmakers of the past decade.”

In 2017 she won the Trailblazer Award and Best Costume Design at the Chicago Independent Film Critics Circle Awards for The Love Witch, and in 2019 she was invited to join the Academy of Motion Picture Arts and Sciences. She is listed in a Rotten Tomatoes article as one of “The 21 Masters Of Horror Shaping The Genre Right Now.” The Love Witch appeared on many 2016 best-of-year lists, and on Rotten Tomatoes it’s ranked as the #40 horror film of all time. In 2021 she wrote her first novel, a work of Gothic fiction called Bluebeard's Castle.

Q & A with Anna Biller

Q: Why did you make THE LOVE WITCH?

I’m always interested in exploring female fantasy, and the sexy witch is a loaded archetype that is simultaneously about men’s fears and fantasies about women, and women’s feelings of empowerment and agency. So whereas we are used to seeing the sexy witch or the femme fatale from the outside, I wanted to explore her from the inside. The main character, Elaine, is a cross between myself – an artist who has always craved love - and certain pathologically narcissistic women I’ve known. I also wanted to make a film about heartbreak, to literally put that feeling on the screen.

Q: Some say your work is “style over substance,” with the way you design your sets, and with so many set pieces. How would you respond to those people?

Well one thing I will say is that style IS substance. Design is a big part of creating character and story. I like to make people feel they’re watching a construction, and I like to use archetypes and symbols in a way that’s considered outdated now. But symbolism – including color symbolism – is a powerful way of telling a story, and creates meaning. For instance, I have a Victorian Tea Room set in the film that’s all pink and peach, and it creates a strong mood of the feminine. The set alone tells you that this is a woman’s environment, and that a man would seem out of place here. I wanted to create this private feminine space, for men watching the film feel that they’re being voyeurs to an environment where they don’t belong. My boyfriend even said, “You have to get in and out of that Tea Room scene in five minutes or less, because you’ll lose your male audience!” But my strong visual style is also of course about realizing my visual fantasies on the screen.

I also like to reference older genres because I like to play with expectations and create surprise. The meaning is in the spaces in between, in the places where the film diverges from genre and takes an unexpected point of view. Because I use genre in this way sometimes people think my work is pastiche or parody, but I think of it more as a personal way of working out my demons. I’m also a real fetishist about lighting. I want the subject to stand out from the background, for there to be depth on the set, and for the women to look maximally glamorous. So I work very closely with my cinematographer to get those effects. My cinematographer on this film, M. David Mullen, is a real genius. He is also a fan of classic movies, and has encyclopedic knowledge of all of the techniques that were used to create the look I wanted. We had worked together in the past, and I knew he would be the best cinematographer to shoot this project.

Q: What was your filmmaking process for this film?

I spent a long time researching narcissism and witchcraft, and writing and rewriting the script. After that, it was a couple of years of just making things in my studio. I made a lot of the wardrobe including all of the renaissance costumes, and also made a lot of the props, including the pentagram hooked rug, the altar, the spell book, many of the paintings, etc. And I would drive all over town and find locations, then redesign the sets based on the new locations, making dozens of drawings and floorplans. And then I composed and recorded some of the score, and made storyboards. After that I cast my lead actress and designed a custom wardrobe for her, and then did the rest of the casting and set up pre-production with the crew.

But I think my favorite part of the filmmaking process has been working with the actors. That’s when it all started to come alive for me. I have some really wonderful actors in this. I worked with my lead actress, Samantha Robinson, for about a year to construct the character of Elaine. We watched a ton of old movies and studied psychology and went to rituals, and she internalized the narcissism that Elaine is supposed to have, and the externalized acting of some of the old movie divas, and blended these qualities seamlessly into her character. And she has a self-contained quality of her own that knocked me out during her audition. No one else I saw had anything close to that quality. It was how Von Sternberg described the young Marlene Dietrich – someone who didn’t give a damn so she had incredible power on the screen. And the other actors are top-notch as well. Laura Waddell for instance is absolutely stunning in her role as Trish: so natural and so empathetic – so opposite from Elaine. She is the “good girl,” whereas Elaine is the “bad girl.”

Q: So, which character should we identify with – Elaine, or Trish?

Our identification flips, depending on the scene. I’m trying to talk about how difficult it is to be a woman in today’s culture, and how all of the options for creating an identity are problematic. For instance, Trish is comfortable with herself and happily married, and Elaine feels she has to tie herself in knots to please a man. So Trish is the “normal” one and Elaine is desperate and has self-esteem issues, but in the end Elaine’s uses her fantasy-doll tactics to steal Trish’s husband and destroy him, and Trish is left widowed and broken. So when we see what Elaine has done to Trish we hate Elaine and identify with Trish, but at other moments, as when Elaine is flashing back to her abuse by men, we identify with Elaine. I tried to create a Jungian animus for Elaine – a group of judging, manipulating male characters that she hears in her head or paints in her paintings. It’s in her attempts to escape this animus that she becomes dangerous to herself and to others. It will be interesting to see how many women will relate to this.

Q: So what message should we take away from this? That it’s empowering to cater to men? That it’s disempowering?

Ultimately I’m saying that it’s disempowering. But the reality is that women have to cater to men to survive, and they have to make the best of that. Transgressors – women who refuse to take on a feminine role, whether in their looks or attitude - are ultimately punished. But I’m also trying to introduce this idea that it’s not all about pleasing men – that there’s also the narcissistic gaze that Laura Mulvey mentioned in her famous essay “Visual Pleasure and Narrative Cinema.” There is one moment where Trish tries on Elaine’s lingerie and wig and admires herself in the mirror, and that is a real moment of empowerment for Trish, because she really is in love with herself in that moment and feels sexy in a way she has never allowed herself to feel. And the burlesque dancer featured in the movie is absolutely in love with herself and her own image, in a gaze that’s also a mirror gaze. Radical feminists would say that this gaze is “bad” because it comes from being trained to objectify ourselves, but whether it’s bad or good it’s the way many of us experience ourselves, and that’s what I want to go into. For myself, I get great pleasure in watching movies with a narcissistic gaze. That’s one reason I make movies - to create that gaze on screen, the gaze of the woman in the mirror.

Q: What were some of your sources of inspiration for THE LOVE WITCH?

Originally I was inspired by 1960s pulp novels and Italian horror films, and some b-horror movies such as Romero’s “Season of the Witch” and the British movie “Horror Hotel.” And then I started looking at a lot of European art films. I have been really drawn to Fassbinder, Losey and Bunuel, Douglas Sirk, and my all-time favorite, Jaques Démy. Hitchcock was very inspiring because his ‘50s color films have exactly the look I’m trying to emulate, and I was trying to capture horror and melodrama the way he did. I was trying to find films that were similar to what I wanted to express, that I could draw from or quote. But there really is nothing similar, because I’m mixing genres so much.

THE LOVE WITCH is not like other horror films because it has such strong moments of romance and melodrama, which are my attempt to get at something fundamental in female psychology and fantasy. Normally the witch figure is a siren who eats men alive and has no heart, but Elaine is a woman whose heart has been broken because she has been rejected by the man she loves. And she is a serial killer in the sense that she is literally “loving men to death.” Whereas male killers kill mainly for lust or power, female killers, such as the mythic witch Medea, often kill for love. So I think of Elaine as a modern Medea. She would rather see a man dead than to see him alive and not loving her. But since she is mentally ill men eventually leave her, and she continues her endless cycle of abuse. She plays that record that women play over and over again in their heads when they are rejected: “Why doesn’t he love me anymore? What’s wrong with me? How can I get him back?” This is the cycle of self-abuse that causes Elaine to become a sexy witch in the first place. And the witchcraft setting is perfect for this, because it’s a world of people turning desperately to spells and magic to get what they want, after they’ve lost confidence in their own lives.