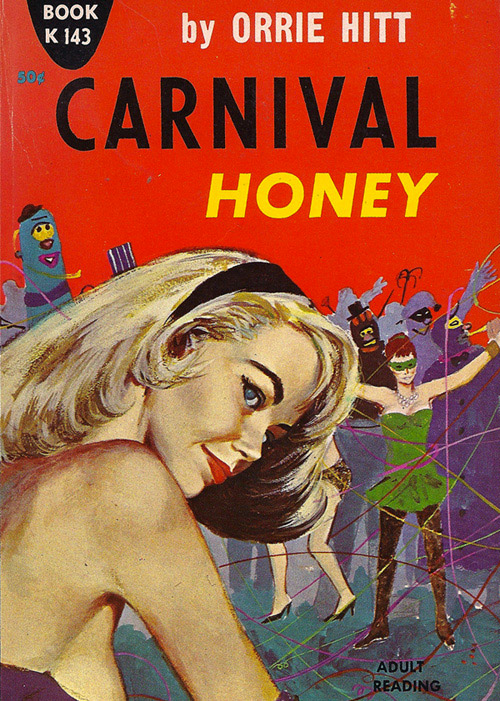 One of my projects in development is a film based on CARNIVAL HONEY, a pulp novel written by Orrie Hitt in 1961. Like many vintage pulp novels, CARNIVAL HONEY combines a realistic, gritty atmosphere with a sense of the liberating escape fantasy of sex. Part of what interests me about this novel is that it discusses female desire and sexuality at a time before ideas about sex and gender became so polarized. Therefore there is a sense of men and women struggling together to figure it all out. In some ways it’s a continuation of the work of D.H. Lawrence, in that it views sex with a fully human dimension, and with cathartic powers. In the film I'm going to try to capture the atmosphere of the novel as authentically as possible, and thus let the audience in on a rarefied world that’s never been captured on the screen – a world that steamy film noirs such as Butterfield 8 would have liked to show but couldn’t for censorship reasons.

The novel takes place in a carnival, where carnival strippers and male workers toil hard at night for their money, and have nothing to do by day but drink and have sex in their trailers. The women enjoy their own bodies and frequently admire themselves in mirrors, sometimes naked. They talk and think about their bodies too, saying things such as, “My bust is forty-two inches, but I’m only nineteen inches down there (referring to their waists).

The main conflict arises when one of the show’s two strippers becomes unreliable due to drinking binges, and they have to get another girl. On short notice, the only girl available is the carnival owner’s nineteen-year-old daughter Ann. Ann has a great body and wants to help the carnival, so she joins the act against her father's wishes. There is impassioned discussion about the pros and cons of the strippers going fully nude: on the one hand they can make better money, on the other hand it socially stigmatizes the girls and is illegal. Each stripper has flashbacks describing how they got into stripping, describing various love affairs involving aggressive males who were ultimately responsible for their fall.

In this film I want to remove the prurient gaze of the male spectator, and to replace it with a female narcissistic and self-reflective gaze. Both gazes are actually present in the novel, partly because of enforced censorship codes that required sex novels to have social value, partly because Orrie Hitt was a good writer, and partly due to the way that men's magazines and novels catered to men's desire to revel in the secret thoughts of a "dirty" woman. Yet today when a sexual women is no longer a "dirty" woman, the subjectivity of the women in this novel becomes very interesting and radical. I see this film as a chance to play with cinematic possibilities involving a super-charged sexual atmosphere that is very different than the one today, and that can teach jaded contemporary viewers a lot about the magic of sex and performance.

The screenplay for this film has been completed, and I plan to put it into production sometime after my next project, which is my "Bluebeard" movie.