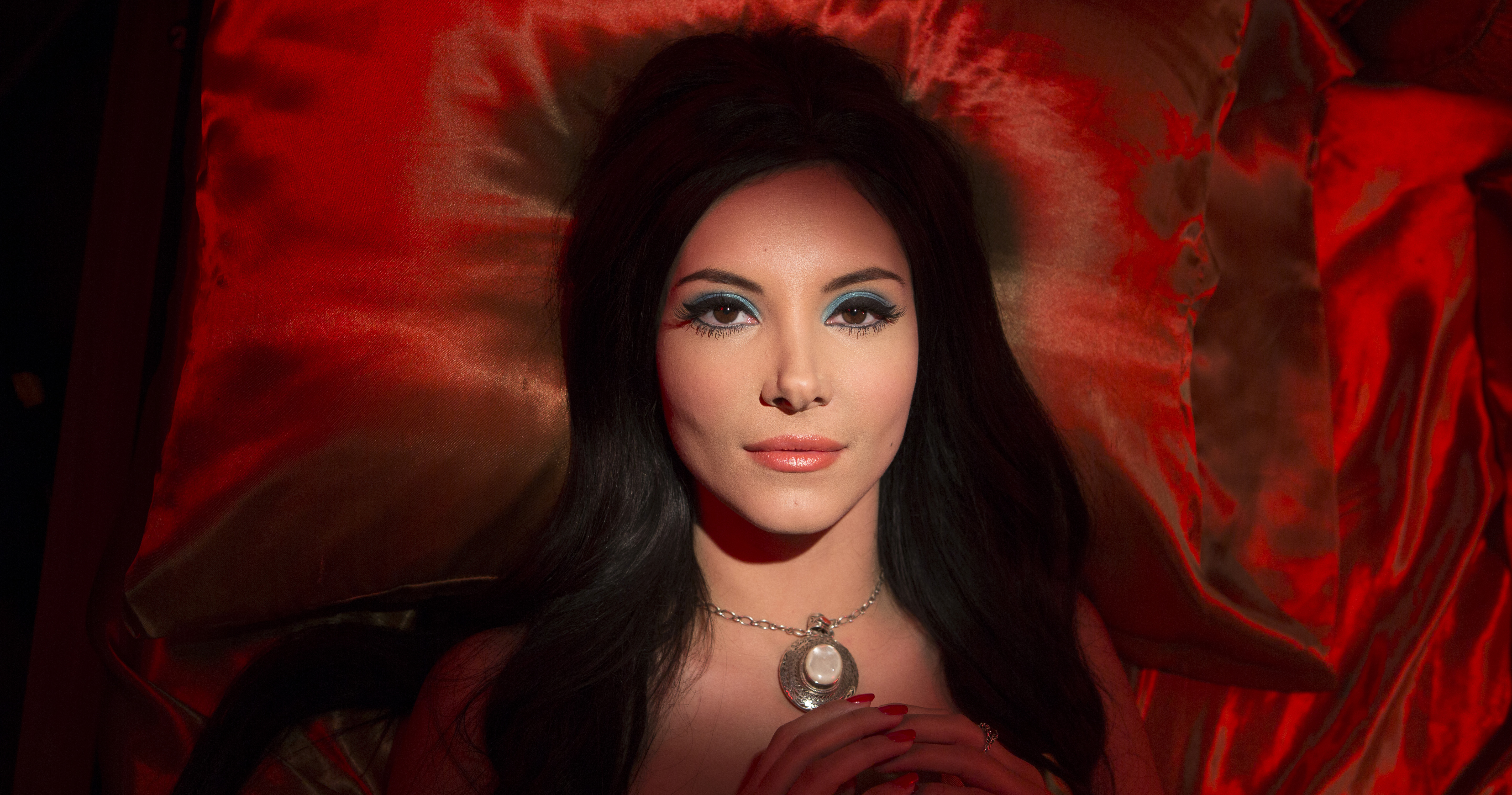 INDIEWIRE
Sex, death, Satanic rituals, God-level costume design, and cinema’s greatest tampon joke ensue, as Biller spins an arch but hyper-sincere story about the true price of patriarchy. A spellbinding homage to old pulp paperbacks and the Technicolor melodramas of the 1960s, Anna Biller’s THE LOVE WITCH is a throwback that’s told with the kind of perverse conviction and studied expertise that would make Quentin Tarantino blush. –David Ehrlich

THE NEW YORKER
A metaphysical astonishment. The costumes and furnishings, Biller’s own handmade versions of the era’s candy-coated extravagances, are as exquisitely arch and theatrical as the performances and the action, which—for all their comic exaggeration—echo with an uncanny symbolic power. –Richard Brody

FILM COMMENT
Biller’s sharp film stands in stark contrast to the complacency and crushing safeness of the vast majority of independent films made in the U.S. Shot in 35mm, her film displays a technical mastery—framing, color, playing with focus—that is glorious to behold. As the singular creative force coursing through these different aspects of the production, her aesthetic is formidable (the tea room scenes!) even as the story unfolds at an unhurried pace. At certain points, The Love Witch induces the kind of mild to moderate discomfort brought on by someone wearing too much perfume—potent to the point of being overpowering. Watch with care. -Violet Lucca

THE VILLAGE VOICE
The Love Witch is a sort of retro throwback modeled on the stylized European exploitation films of the 1960s. Biller shot it, ravishingly, on 35mm and furnished every frame with uncanny precision; the result really could pass as a relic of the era. That it's quite funny and charming seems almost beside the point. I'm keen to watch it again just to luxuriate in it. -Calum Marsh

TALKHOUSE
No film I’ve seen in recent times has been as startling, empowering, hilarious and wholly enjoyable to watch as Anna Biller’s masterpiece The Love Witch. With her mastery of the sensuality of cinema, her grasp of the power of color, light and sound, and her ability to pierce the core of the interior female space – even if all she finds in her character is bewildering emptiness – Anna Biller is one of the most exciting directors in decades. –Allison Anders

SCREEN DAILY
Just about the only filmmakers who have previously attained this level of control over their visions are Russ Meyer and Wes Anderson; the fact that The Love Witch evokes both their self-enclosed universes, but with a uniquely female viewpoint, suggest how fresh and strange Biller’s imagination is. Biller does more than resurrect a chic, cool bygone film style. She counters many of the underlying assumptions of the male-directed exploitation films she evokes, even as Elaine is ultimately shown to be a genuine monster. –Kim Newman

BALTIMORE SUN
Wildly entertaining, Biller’s film is a loving throwback to late-‘60s adult fare. Its look and feel, from the film stock Biller chose to shoot on to the soundtrack to the raven-haired Robinson's Morticia Addams-length hair, was all wonderfully evocative of the period. The result is a cinematic ride to be relished — cheeky, compelling and often hilarious, clearly like the work of few other (if any) contemporary filmmakers. –Chris Kaltenbach

THE HOLLYWOOD REPORTER
Destined to be a cult classic, this sophomore effort by Anna Biller (Viva) is a heady throwback to the American and European sexploitation horror films of the late '60s and early '70s. Shot in glorious 35mm and featuring a vibrant color palette that makes Technicolor seem like sepia, The Love Witch is an expertly executed homage that works brilliantly on its own original terms. Suffusing its genre conventions with sly feminist commentary on the relations between the sexes, the pic offers as much for the mind as the eye, and that's saying something. –Frank Scheck

CHICAGO READER
This spellbinding ode to exploitation films of the 1960s and '70s is impressive not only for its mock-Technicolor hues and period mise-en-scène but also for what lies beneath: a creepy and cunning examination of female fantasy. Robert Frost once wrote that “love is an irresistible desire to be irresistibly desired,” and Biller’s witch, both liberated in exploiting her sexuality and repressed by her white-knight fantasies, embodies the idea. –Leah Pickett

SIGHT AND SOUND
There is no film in this year’s FrightFest offerings more visually attractive than The Love Witch. It combines the retro glamour, back projection and technicolour brilliance of 1960s cinema, was shot on archaising 35mm, and boasts perhaps the most immaculately applied lipstick and eyeliner of the new century. Yet all this is part of the film’s seductive artifice, fashioned to mesmerise the viewer in much the way that witch protagonist Elaine (Samantha Robinson, in a wonderfully stylised performance) uses makeup, dress and wig to lure male lovers by reflecting their fantasies.-Anton Bitel

THE GUARDIAN
L.A. film-maker Anna Biller achieves an ecstasy of artificiality in this amazing retro fantasy horror, delivered with absolute conviction. It’s drenched in the Technicolor 60s: there are touches of Italian horror, Hammer and late Hitchcock. Biller devises a feminine sensibility for exploitation to match the macho connoisseurship of Tarantino or Rodriguez. –Peter Bradshaw

SHOCK TILL YOU DROP
This is a fiercely intelligent, visionary work hiding in the skin of a trashy exploitation movie bauble and it firmly locks-in Biller in as one of the most exciting filmmakers alive. –Chris Alexander

SCI-FI NOW
Anna Biller’s The Love Witch is so beautifully made that, at a certain point, you start to wonder why everyone else isn’t trying as hard. This immaculate tribute to 1960s Technicolor and soap opera melodrama, which played at Fantasia Film Festival, is absolutely stunning to look at, and shows an incredible clarity of vision, voice and skill. It’s not long before we’re under the filmmaker’s spell as surely as the hapless men are under the witch’s. The surface pleasures are certainly a joy, but Biller’s voice sounds clearly throughout. This is really quite wonderful. –Jonathan Hatfull

VAGUE VISAGES
What Biller manages to accomplish with The Love Witch is nothing short of astonishing — not only in the painstaking recreation of the mood, sets and look of the films she’s referencing, but in how she spiritually re-appropriates that decorative world into something radical and new. –Justine A. Smith

THE SKINNY
Anna Biller is an auteur in the term’s most potent incarnation. The Love Witch is nothing less than a tour de force of 21st century queer, feminist film. But this is a multi-faceted gem, and The Love Witch can simply be enjoyed as a '70s gothic romp – riotously funny, overwrought, dramatic and full of suspense. –Rachel Bowles

AUSTIN CHRONICLE
Anna Biller [has] quickly established herself as one of the most exciting filmmakers of the past decade. Biller meticulously crafts her movies with such care that it would make Wes Anderson weep. Biller infuses the film with such style, such elegance, such joie de vivre, that I had a smile on my face for the whole running time. She is a filmmaker unlike any other working today. I just hope it doesn’t take another 10 years for her to make her next one. –Josh Kupecki

THE PLAYLIST
The first thing that you notice about Anna Biller‘s “The Love Witch” is how strikingly beautiful of a movie it is. It is sumptuous in its eye-popping photography filled with relentless color and incredibly impressive and precise costume design. Biller proves to be an auteur in the truest sense of the word. She also, quite possibly, has created a new cult classic. –Jordan Ruimy

Over the last decade, Los Angeles-based film artist Anna Biller has eked out a small but fervid following; watching her films is like undergoing hypnosis by means of feng shui, wherein the viewer is lulled into a stilted, cheeky and brilliantly manicured simulacra of golden-era Hollywood staging, blocking and delivery. However indebted these forms are to their masculinist forebears, Biller is not content to be considered a pastiche artist: in the below discussion she concedes that her choices are guided by what gives her cinephilic pleasure, although — because? — the feminist interrogations of her work are impossible to ignore. [more]

Anna Biller makes films that can kill you with one look. Nine years ago, her movie Viva, a tale of promiscuity in 1970s Los Angeles suburbia, earned her a reputation as a starlet of underground Hollywood. The film is blessed by the striking, celluloid beauty of 35mm, which is perfectly offset against the kitsch costumes of Biller’s characters and the vivid artwork that adorns the walls of their abodes. It should come as no surprise then that her sophomore feature The Love Witch gets a similarly stylish treatment. Set in a strangely ambiguous era, it toys with ideas of sexual prowess and feminist ideals that feel contemporary, but are delivered under a fantastical Technicolor spotlight. Ahead of The Love Witch’s Discovery screening at FrightFest 2016, Biller spoke to AnOther about how she created a twisted, yet intelligent piece of statement cinema. [more] -Douglas Greenwood

When I first saw the trailer for The Love Witch, my jaw-dropped at the gorgeously vibrant, highly-stylized visuals. The scenes looked incredibly authentic, as though they were ripped straight out of old Technicolor films from the 1960s. Today, we are focusing solely on the aesthetics, namely the costume design. The film’s colorful costumes are set against a vivid set design, adding a whole different level of enchantment to Elaine’s spells and potions. We are so used to seeing witches either portrayed as ugly (Hocus Pocus), or incredibly beautiful (but solely wearing head-to-toe black, like in American Horror Story: Coven.) Elaine’s sartorial style is the opposite of the typical cinematic witch — a psychedelic, mystical rainbow. She’s Morticia Addams meets Mary Quant. [more]

CINEMATIC INVESTIGATIONS INTERVIEW
Falling for The Love Witch, an interview with Anna Biller

Back in January at International Film Festival Rotterdam, among the hundreds of films screening, a path emerged that lead led this writer to films concerned with womanhood. Unlike any other film at IFFR however, was Anna Biller’s gloriously technicolour The Love Witch (2016). Building on the themes of female and male power and sexuality, explored in her previous feature Viva (2007) and her short films, Three Examples of Myself as a Queen (1994), The Hypnotist (2001), and A Visit from the Incubus (2001), Biller has created with The Love Witch, the ultimate evocation of the absurdity of gender inequality, realised in a perfectly rendered, beautiful film world. [more]

In June, Grimoire made a pilgrimage to the Chicago Underground Film Festival, where we attended a showing of Anna Biller’s supernatural exploitation film The Love Witch. We were utterly captivated. Below find our conversation with Biller about the film as well as a catalog of her influences. [more]

Coming from a background as a visual artist, writer-director Anna Biller makes films that, on one level, can be experienced as pure cinema. But while the aesthetics are undoubtedly pleasurable, underneath the meticulously crafted design of Biller’s films lie sharp satirical observations about the relationships between men and women. We spoke to Biller over the phone just days before The Love Witch’s home video release, where she discussed at length common misconceptions about her work, the deeply personal, feminist message of The Love Witch, and the commitment to classic cinema technique that drives her art. [more]

Anna Biller is a 21st century auteur. For her new film, The Love Witch, she acted not only as director, producer, scriptwriter and art director, but also designed and crafted most of the costumes, scored the film and had a hand in its sumptuous classical lighting and cinematography. The movie has earned a cult following and critical acclaim, setting the festival circuit ablaze with its feminine charms, stunning 60s aesthetic and cutting gender politics. It’s intelligent, suspenseful and riotously funny, but the film (and even Biller herself) has also received some backlash, dismissal and mislabelling – even, occasionally, from its fans. With The Love Witch now out on DVD and VOD, we sit down to chat with her about cinema, the reality of being a female director, and the male-dominated nature of film criticism.[more]