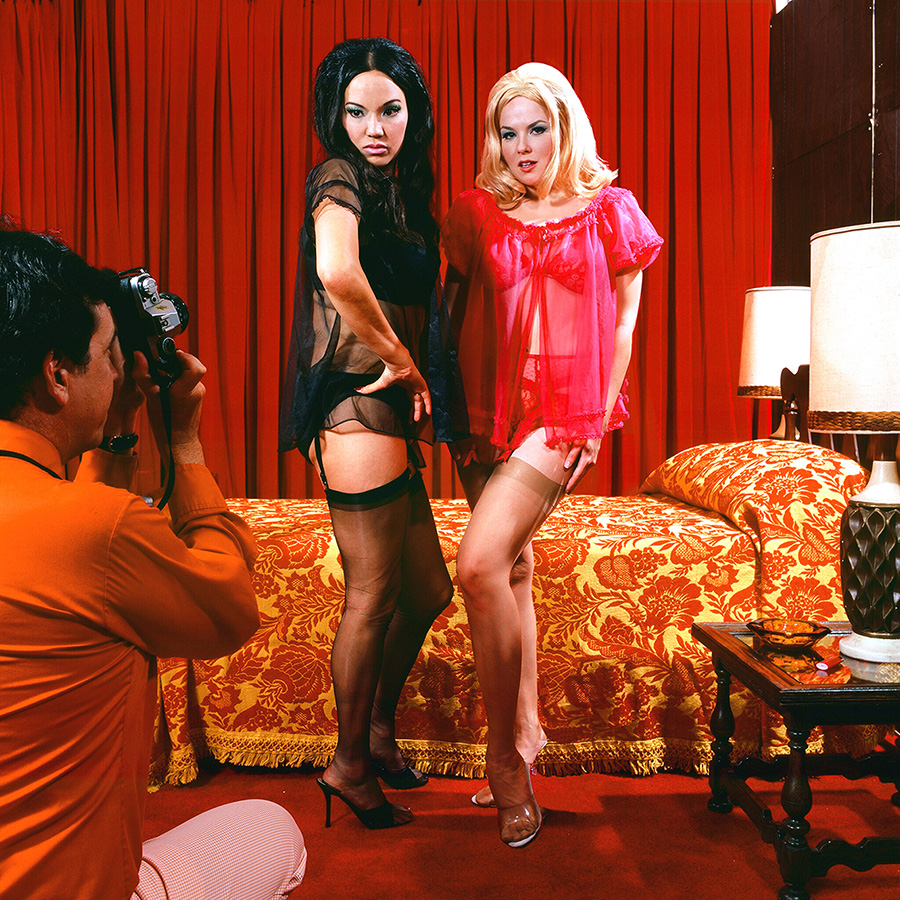 VIVA is a cult freak-out retro 1970's spectacle, about a bored housewife who gets sucked into the sexual revolution. Abandoned by her perfect Ken-doll husband, Barbi is dragged into trouble by her girlfriend, who spouts women's lib as she gets Barbi to discard her bra and go out on the town. Barbi becomes a Red Riding Hood in a sea of wolves, and quickly learns a lot more than she wanted to about the different kinds of scenes going on in the wild '70's, including nudist camps, the hippie scene, orgies, bisexuality, sadism, drugs, and bohemia. VIVA is a highly stylized film that draws on classic exploitation cinema for its look and characters. Saturated to the hilt with vibrant color, and exquisitely detailed in its depiction of the period, VIVA looks like a lost film from the late '60s, even down to the campy and self-assured performances, the big lighting, the plethora of negligées, and the delirious assortment of Salvation Army ashtrays, lamps, fabrics, and bric-a-brac. Whether you're looking for naked people dancing, alcoholic swingers, stylish sex scenes, a sea of polyester, Hammond organ jams, glitzy show numbers, white horses, blondes in the bathtub, gay hairdressers, or psychedelic animation, VIVA has it all! 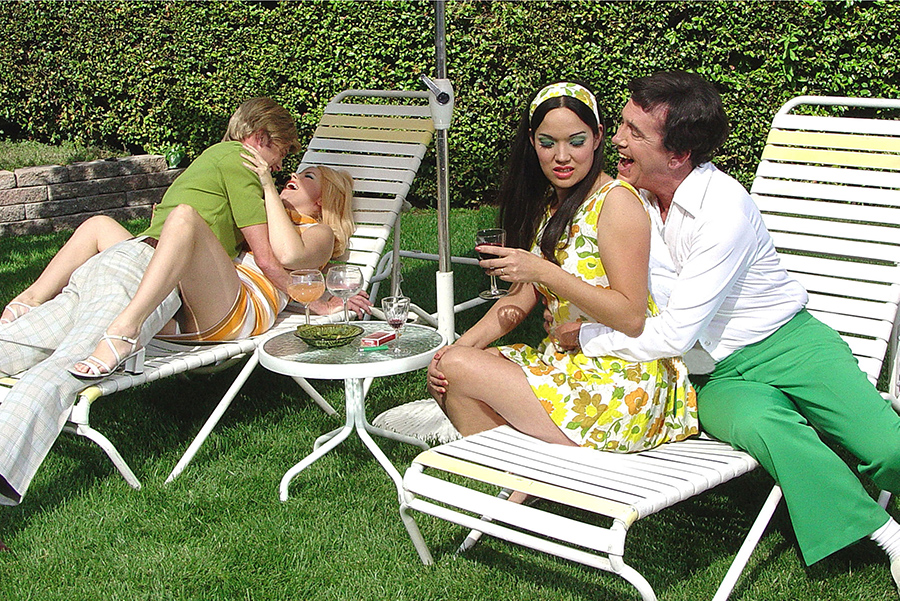 "Viva" is a startlingly pitch-perfect reproduction of the kind of gauzy sex movies from the 1960s and early 1970s that preceded the hard-core revolution. [Biller's] attention to visual detail is extraordinarily vivid, from the Kool-Aid-colored costumes to the supergraphics that zigzag across the sets. --Manohla Dargis

It takes skill - a certain sly, even perverse nimbleness of craft - to make an homage to schlock movies that treats them as works of art. Viva, written and directed by its star, Anna Biller, could just about be the third featurette in Grindhouse. It's a lovingly re-created, almost fetishistically spot-on tribute to the candy-colored soft-core sexploitation films that sprouted up like weeds in the late '60s and early '70s...a truly sexy movie." --Owen Gleiberman

A meticulously designed re-imagining of "classy"-minded '70's-era soft porn--boy meets girl, but more important, girl meets free love--that pays as much attention to the realities of the sexual revolution for women as it does the get-it-on aura of wet-bar aesthetics, polyester, peekaboo nudity and color-saturated interior decor. It converts an earlier male generation's notion of swinger gratification into the pitfalls for females of the unfulfilled tease.

Biller stars (and strips) as a neglected Los Angeles housewife named Barbi who experiments with looser sexuality by becoming a call girl, only to find that her fantasies and those of the men she encounters hardly mesh.

Meticulously constructed--from the cheesy acting and stilted direction to the shag sets and vintage film stock--"Viva" is a pitch perfect resurrection of the "Valley of the Dolls" days of cinema. --Michael Lerman

Its titular heroine a neglected housewife drifting into all the sexual revolution mischief 1972 Los Angeles has to offer, "Viva" is a spot-on spoof of low-grade '60s/early '70s sexploitation pics. Biller takes inspiration not just from Z-grade pics of her favorite era, but also from its Playboy magazine aesthetic and TV cologne/liquor commercials. Her production design is a triumph of dedicated thrift-shop acquisition, with decor as much as drop-dead costumes amplifying the cheesiest aspects of early '70s flamboyance. C. Thomas Lewis' cinematography heightens color to an eye-popping degree, while his compositions delightfully reproduce all the era's lower-budget conventions. --Dennis Harvey

Anna Biller's 1970s-styled sexploitation parody Viva may at times come too close to the real thing, but there's a welcome delight in the film's unapologetic and total submersion into cheap thrills. The story concerns suburban housewife Barbi (played by the seductive Ms. Biller herself), whose sexual awakening coincides with the Me Decade's excesses. When her clueless-executive husband leaves on yet another trip, frustrated Barbi is off to the carnal races. She renames herself Viva ("Because I want to live!"), takes a job as a prostitute, visits a nudist colony and stars in a musical orgy. No outfit is too gaudy, no penis too limp to make it into this film, and Biller's brazen art direction, as well as the copious nudity, leaves everything perfectly overexposed. --Derek Thomas

Viva [is] one of the rare skin flicks worth watching for a full two hours. Biller is clearly positioning Viva as a comment on the moment in history when the political ideals of the '60s got bound up with the new freedoms of the '60s, and how once women realized that being coerced into drunken sex with strangers wasn't as much fun as they'd hoped, they lost some interest in "liberation" in general. Viva's characters nervously mock their own worldliness, as they grab a jug of scotch and a girlie mag and cackle, "Now I'm all set! Coffee and the morning paper!" And yet Biller obviously feels for these plywood people she's created. She surrounds them with rich color and eye-popping décor, and fills them with the awareness that as awkward as their sex games may be, they may one day miss what they stood for.--Noel Murray

Biller's film is to the films of Radley Metzger and Russ Meyer what Todd Haynes's Far From Heaven was to Douglas Sirk, --Eric Henderson

Viva has everything you want to see in a movie, rendered in luridly bright Technicolor and filtered through what I can only describe as an XXX-rated scramble of The Brady Bunch. --Cheryl Eddy

Biller is bringing kinky back in a way that few women directors have ever dared.--Delfin Vigil


THE HOUSE NEXT DOOR

From vintage "Playboy" magazines to chartreuse shag rugs, from checked polyester suits with open shirts to lion's head medallions, from cologne and cocktails to green Jell-o, "Viva" is nothing less than a treasure chest of nostalgia! But beneath all the hippies and hair, makeup and music lies a film bubbling with ridiculous humor and serious heart. Viva is great camp because it's so over the top - pushes the envelope in all directions - while remaining dryly and wickedly deadpan. As the slimy theater producer Arthur puts it, "This is going to be the freshest thing since Liberace." I couldn't agree more. Viva is the ultimate post-millennial midnight movie.--Lauren Wissot